Miter Gears are a type of bevel gear designed to work in pairs. Miter gear sets are found in applications where the drives’ input and output rotational speed does not vary, but direction changes. A miter gear set has a 1:1 ratio, identical dimensions, and several teeth.

A miter gear is part of the bevel gear family designed to work in pairs and with both gears having identical dimensions and number of teeth. Miter gears are designed for applications where the rotational speed of the input and output drives remains constant, but the direction changes. Generally, the difference in drive/output orientation in miter gear sets is 90°, although groups are available which produce a selection of angular deviations. Miter gears are available in either spiral or straight toothed configurations. Spiral miter gears are better suited to high-speed applications such as power tools and machine drives. Straight-cut miter gears are suitable for low-speed applications such as door opener mechanisms and hand tools. 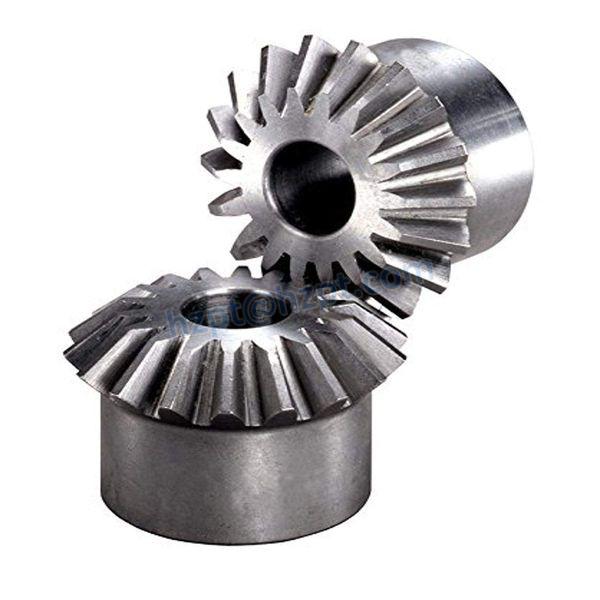 Miter gear sets are used in machinery designs requiring changes in drive direction while maintaining drive speeds. These criteria are achieved by employing a set of cone-shaped gears of identical size, profile, and tooth number. This design allows the gears to be positioned in an opposed orientation while maintaining a constant speed relationship between the two drives. In most cases, the miter gear turns the output drive at right angles to the input. Gear sets can, however, be designed to affect almost any directional deviation.

These gears fall into two basic categories: spiral or straight cut. This terminology refers to the angle at which the gear’s teeth cut at about the face or cone angle. Spiral cut gears are more appropriate for high-speed applications because the curve of the teeth allows for gradual engagement. This reduces the amount of “clashing” when the teeth of the two gears engage and make the gear train stronger and quieter. This type of gear is commonly used in high-speed applications such as lawn trimmers, where the motor and driveshaft are orientated at right angles to one another.

A straight-cut miter gear is more suitable for slow-speed applications such as hand-operated door openers and hand tools. In these applications, the shortcomings of straight-cut gears are less noticeable, and the reduced cost of production makes their use attractive. Miter gear materials are dictated by their intended use with stern-faced, high carbon steel appropriate for high load and high-speed applications. Nylon and various injection molding resins are used for gears that don’t work as fast or hard. The close relationship between individual gears means that both gears in a set should ideally be replaced even if only one is worn or damaged.