Double helical gears are a variation of helical gears in which two helical faces are placed next to each other with a gap separating them. Each face has identical but opposite helix angles. Employing a double-helical set of gears eliminates thrust loads and offers the possibility of even more significant tooth overlap and smoother operation.

Double helical gears have all of the advantages of helical gears, which are strong and quiet, plus have the benefit of canceling the thrust forces by combining helical gears with both right and left-hand twists. On the other hand, they have the disadvantage of being difficult to manufacture. 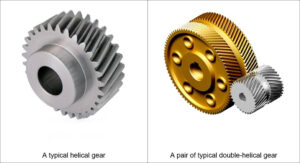 Minghua Gear is one of leading transmission gears manufacturers, suppliers and exporters of mechanical products, We offer agricultural gears, industry gears and many other gear products.