One distinguishes two types of cylindrical worm and worm wheel：
A set of “worm and the helical gear.”
A set “worm and worm wheel.”
The first set is a particular case of the ‘helical gears for crossed shafts’ where the pinion for only counts l, 2, 3 (or a small number of) teeth and is characterized by a large helix angle of the tooth.
The calculation is the same as for the helical gears.
The choice of the module should be limited to the normalized set of standard modules. As with helical gears for crossed shafts, there is only point contact between the tooth flanks, so this transmission is not applicable for high loads.
For the set’ worm and worm wheel,’ the teeth of the worm wheel are being milled with a worm mill with the same basic features as the worm. In this case, the gear contact is characterized by line touch, through which higher tooth forces are admissible. 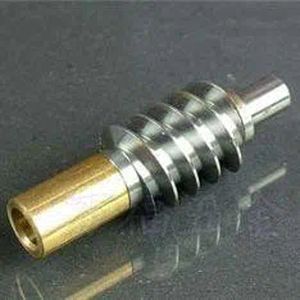 When the oil immersion depth of the worm bearing has reached the requirements, but the oil immersion depth of the worm is not enough, the oil splashing ring can be set on the worm shaft. The oil splashing ring lubricates the transmission parts and bearings to prevent the worm bearing from being deeply immersed in oil. When the worm’s PI is more significant than 10m/s, the worm gear is replaced by the worm gear, which is arranged above the worm gear, known as the overhead type. Its worm gear speed is low, stirring oil loss is small, and the possibility of impurities and abrasive in the oil pool into the meshing place is slight.